Difference between revisions of "Dimensions" 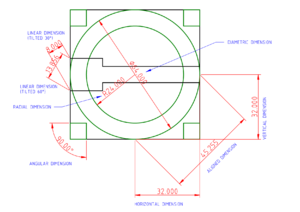 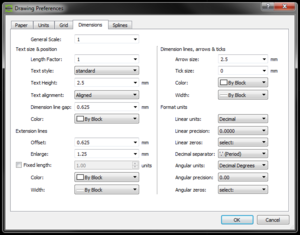 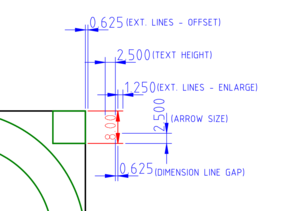 Overarching dimension appearance for a file is set in Drawing Preferences:

The intent is not to mirror related Issues in the GitHub repository, but to present workarounds to accomplish specific tasks.

Dimensions objects "blow up" or are very large when opening file

When opening a previously saved file (LibreCAD 2.1.3), there may be times when the existing dimensions appear to have "blown-up", or the dimension objects are represented as very large, while the dimensions themselves remain correct. In this case, the file had originally left all default values the same but changed the General Scale setting to 50 and the Linear Precision to 0.00. An examination of the default dimension object settings and the settings changed in this file reveals the differences. The main items are Text Height and Arrow Size, but other entries have also changed: Extension lines: Offset, the default for Extension lines: Fixed length, Linear zeros, and Decimal seperator. Change these values back to defaults, or to where you intended them to be, will revert your drawing to its intended form.

This issue has been submitted to Github but is left here as a reference. Possible that this is a side effect of having certain units (e.g., inches) specified as the default unit for new drawings.